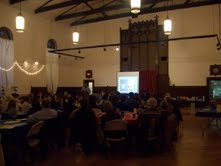 The earthquake that hit Haiti January 12, 2010 destroyed virtually all of Port-a-Prince and much of the already fragile infrastructure there. The United Nations and UN agencies, despite causalities in the United Nations Stabilization Mission In Haiti (MINUSTAH) and the collapse of the UN building in Port-a-Prince, mobilized to provide security, food, supplies, and order in the initially chaotic relief efforts. The United Nations ordered more peacekeepers to the region to protect the thousands of Haitians left homeless and vulnerable by the quake. The United Nations Development Fund for Women set up additional shelters and has provided emergency services and protection to women and their families. Women in poverty stricken nations like Haiti suffer most, especially during times of political crisis and natural disasters. They often lack access to resources, are responsible for the welfare of their families, and fall victim to assault. In conjunction with International Women’s Month, the Iowa UNA and the Des Moines Chapter each organized fundraisers to support the United Nations Development Fund for Women (UNIFEM)’s Haiti program.

The Iowa UNA Night of 1,000 Dinners—Haiti Benefit was held March 4 at Old Brick in Iowa City. The decision to allocate any funds raised to UNIFEM was an easy one. The planning committee received tremendous support from cosponsors, food donors and community members. Iowa UNA members Drs. Chris and Ginny Buresh spoke of their trips to Haiti with the Community Health Initiative within World Wide Village, Inc. A local band comprised of University of Iowa students, Ellis Bell, provided music. Fourteen local organizations agreed to co-sponsor and numerous area restaurants donated food for the event. The event was set-up, staffed and cleaned up by many Iowa UNA volunteers.

International Women’s Day was celebrated with a Haiti Benefit in Des Moines on March 8, 2010 at the First Unitarian Church. Beth Younger, Associate Professor of English at Drake University, talked about violence against women and the difference of its definition in every region of the world. Professor Younger engaged the audience such that her speech became more of a discussion than a presentation. The event was co-sponsored by seven similar-minded organizations in central Iowa with appetizers donated by a variety of local restaurants. All proceeds from the event were donated to the United Nations Development Fund for Women (UNIFEM) and specifically to benefit the earthquake victims in Haiti. The Des Moines Chapter hopes to make this an annual charity event.

The final total raised for UNIFEM’s Haiti program by the Iowa UNA and the Des Moines Chapter was $2,387.24. Thank you to our speakers, co-sponsors, volunteers and to everyone who donated!