After the great success of the Mexican Wedding Cookies, I decided to try another Mexican dessert, Tres Leches Cake with Mango, for a second international dish in May. Tres Leches, for those of you who do not have a Spanish background, means three milks. The cake truly does have three milks in the recipe 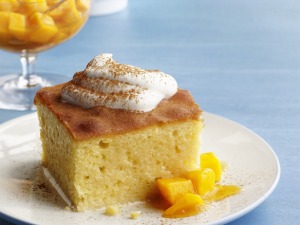 It was the first time I had ever cooked with ‘milk out of a can’, and I didn’t know what to expect. The sweetened condensed milk came out looking like some sort of thick slime al la Ghostbusters, but when mixed with the other two milks, it became a sweet creamy concoction to pour over the baked cake.

The cake making part was also a new concept for me. Don’t get me wrong, I’ve made a lot of cakes in my 24 years, but every single time, they have come straight out of the boxed mix just needing water, oil and eggs added.

Not this time. This recipe truly did come from scratch. I had to hunt out cake flour – I had previously assumed all flour was one of two kinds, regular or naturally rising – wrong again. I found cake flour in a box on the top shelf of the flour section at the grocery store. NOTE: I should mention that the box was dusty on the top for lack of continuous turnover. It seems that I’m not the only one who likes to take the

easy way out when it comes to cake baking.

Some other things that the recipe calls for are vanilla, eggs, sugar, unsalted butter, dark rum, cinnamon, etc. After baking the cake, holes are punched in the top of it with a fork, and the milk mixture – with some rum added in – is poured over the top until it is all soaked up. Sprinkle the cake with cinnamon and pop it in the fridge for 1 hour-overnight.

The Tres Leches Cake recipe says to serve with whipped cream and diced mangos. By whipped cream, it literally means hand-whipped cream, not the easy way out using the pre-made kind you can find in the freezer aisle. The idea that whipped cream can be made by simply whisking together heavy cream and sugar, is not anything that had ever crossed my mind…or ever will again. My arm was so tired by the time I had whisked the mixture enough to give it some consistency – probably close to 6-7 minutes – that I had a hard time bringing the forkful of cake to my mouth to enjoy the labor put into it. When I did taste it though, it was pretty yummy…the rum added to the milk mixture really gave it a very tropical flavor along with the mangos. Although the end product was good, I’m not sure this would be a repeat since there was so much time and effort involved. Your decision.